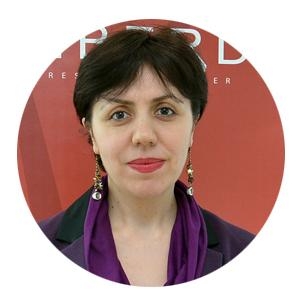 Honors & Awards: In 2009 Aghavni Hakobyan received a title of Associate Professor in Economics by the decision of Yerevan Gladzor University and by the resolution of the Supreme Certifying Commission of the Republic of Armenia. In 2009 she participated in the U.S. Department of State’s premier professional exchange program The International Visitor Leadership Program (IVLP) on the topic of “University Administration in US”. She participated in trainings and conferences in France, Germany, Belgium, Hungary, Slovakia, Malaysia, Moldova, Georgia, etc. She is an author of more than 30 scientific and educational-methodological articles.