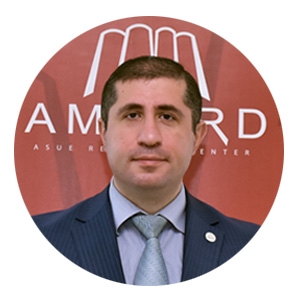 Experience: 2018 to present he held a position of Deputy Director-Senior Expert of AMBERD Research Center. He is an Associate Professor of Political Science at Armenian State University of Economics. Prior to assuming his current post, Vardan Atoyan hold different leading positions in Government Affiliate and University Affiliate Think Tanks. He was Deputy Executive Director at NORAVANK Foundation (2016-2017). He also served as the Director of National Security Research Program at AMBERD Research Center of Armenian State University of Economics (2013-2016), Senior Expert at Center for Political Studies at NORAVANK Foundation (October – December, 2015). Vardan Atoyan has significant work experience for the Government. He was the Chief Specialist at Staff of National Security Council of the Republic of Armenia (2010-2013), Assistant to the Deputy Minister-Chief Treasurer at Ministry of Finance of the Republic of Armenia (2008-2010, 2005-2007). He also served as a Deputy Head of Operational Department - Head of State Budget Registration Division at the same Ministry (2007-2008), and as an Assistant to the Head of Social Fees and Income Tax Control Department at State Tax Service at the Government of the Republic of Armenia (January – March, 2005). From May to December, 2004 he was a Research Fellow at Institute of Economic Research at the Ministry of Finance and Economy of the Republic of Armenia.