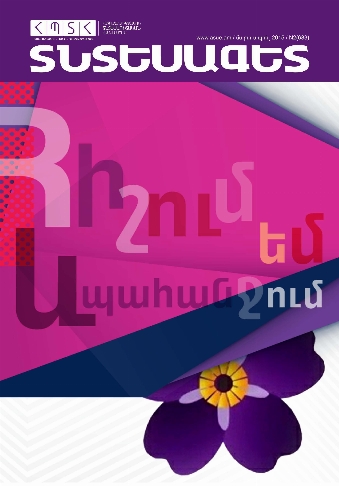 The content and design is dedicated to the 100th anniversary of the Armenian Genocide. It comprises publications which touch history, economic history, culture, as well as the events organized by ASUE students.

In connection with the 85th anniversary of ASUE, student council and the Youth Foundation of Armenia had organized Interuniversity Student Conference "INhead": «The economic system of RA: innovation, development and implementation", which was attended by prime minister Hovik Abrahamyan and Rector Koryun Atoyan. The magazine starts with an article telling about this event and is continued with an interview of Rector Koryun Atoyan.

In connection with Mother’s day "Tntesaget" spoke to female heads of chairs.

The issue also includes a comprehensive article about the seminar on "Eurasian economic integration prospects: a glance from Armenia".

The magazine is full of interesting news. We have tried not to leave any major university event out of sight.

We wish you a pleasant reading and, of course, look forward to a response.

Find the electronic version of the magazine on ASUE official website (asue.am)