TEACHING PROGRAM OF YOUNG FOREIGNERS STARTED AT OUR UNIVERSITY 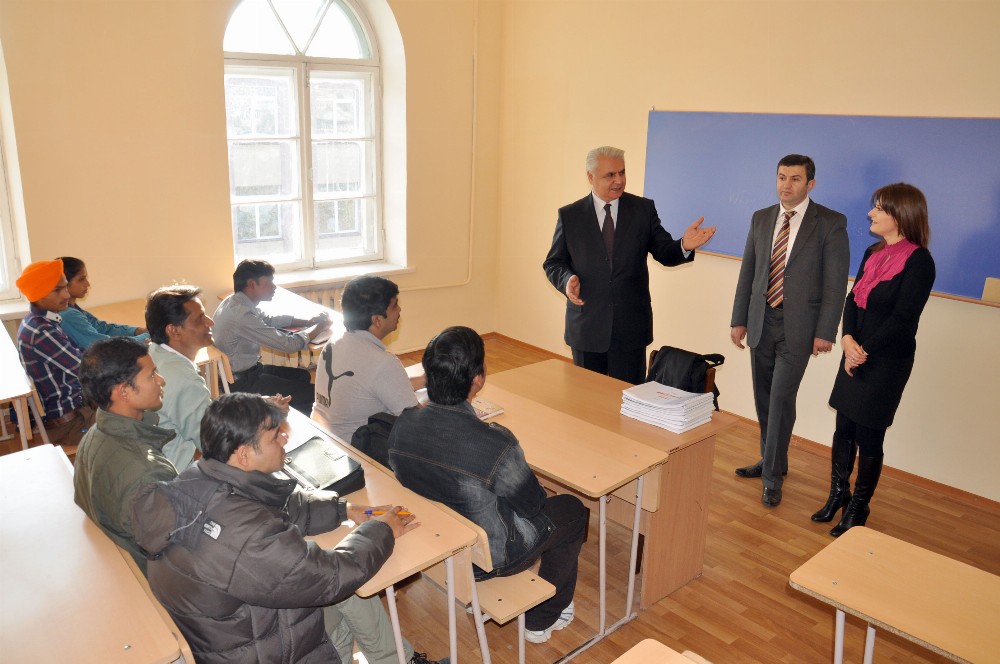 Preparatory courses  of    foreign  students (India and Nepal)  started  at  Armenian State University of  Economics:  being the start  of teaching  program of   foreign citizens  implemented for the  first  time  during the  University’s history.  The  Vice-Rector of  Science  and  International  Relations  Gagik  Vardanyan applyed  to  the  students: “Learn to  learn, to  aquire knowledge, as it is  the decent way  of  comfortably living.  Learn to learn to be  fully involved  in development  of  your  country”, congratulating on  the  start of  teaching, said the  Vice-Rector and  wished  success  to foreign students.  He noted  that  they  would  have  an opportunity  to  learn Armenian,  to get  acquainted with  Armenian history  and  culture.

Educational manuals  of  Armenian language were  handed to the  students  and  the  1st  lesson  started,  which was  conducted  by  an Associate  Professor  of the  Chair  of  Foreign Languages  at  ASUE  Lusine Harutyunyan.

“Considerable preparatory works  have  been  done,  educational  plans and  programs   according to  time  requirements  have  been  formed, seminars for  the  lecturers  have  been  organized, trainings  for the  lecturers  in  abroad  are  expected  for  the  implementation   of  teaching program  of  foreign students”,    Gagik  Vardanyan told ASUE  Media and  Public  Relations  Divison, highlighting  the  implementation of  such  programs.   He  said  that  the  University  exported  its  educational  service  for  the 1st time  by  implementing  this  program.

“This  process  will  benifit  our  University to  improve  educational-methodological  works”,  said the  Vice-Rector  noting that  the  mentioned  problem was highlighted   in today’s  context  of  the Bologna process and the quality assurance requirements.   Gagik  Vardanyan  observed  that  while  teaching the  foreign students  our  young lecturers  would  improve  their  knowledge  of  foreign languages, and  our students  would  get  acquainted  with  the  culture, history, traditions  of  other  countries.

We wish  effective  teaching  to  everybody.