TODAY IS THE INTERNATIONAL DAY OF WORK AND WORKERS 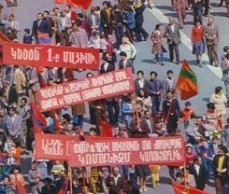 At  the  beginning  of the  20th  century  the  revolutionary movement  moved  to  Russia  and  already  during  the  Soviet  Unions  years  May 1st  was  celebrated  with great fanfare:   accompanied by the traditional Parade.

Today  the  Independent Republic of Armenia,  as  many  countries  in the  World,  is  celebrating  the  Workers'  holiday:  with    proud consciousness  that  only  people  who  work can  feel sterling,  that  the   work  is the pledge   of  human improvement and development, victory  of  creativity and  spirit.

Dear  members  of ASUE,  ASUE  Media  and  Public  Relations  Division congratulates  You,  wishes  power  and  energy  to  feel  the delight  of  work  as  long as  possible.