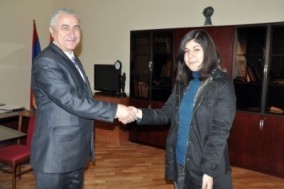 “ You have become the 1000th person who likes our University’s official page in facebook social network. We are glad that you are interested in the University life, events taking place and innovations. I would like you to participate actively in University life and support us with your suggestions to implement the reforms successfully’’, noted Koryun Atoyan,  ASUE Rector, congratulating Armine Yarlova, 3rd year student, Department of  Managemenet. The Rector also congratulate the student for the coming holidays and handed her symbolic gifts.

“ I am very excited and grateful for this beautiful surprise. I was impatiently waiting for the one who would become the 1000th, who liked the page. When the 999th   user became known, I was so excited, I couldn’t even find the  "like" buttom. Shortly after it became known that I was winner”, said Armine during the talk with the Media and Publik RelationsDivision and promised that she would actively follow the page.