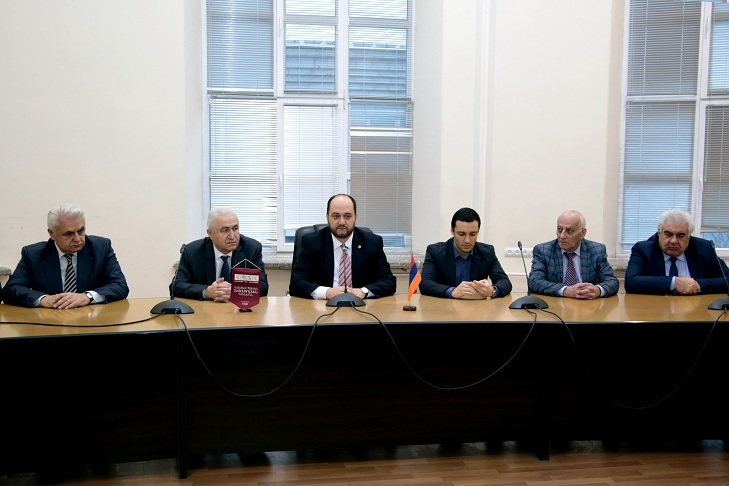 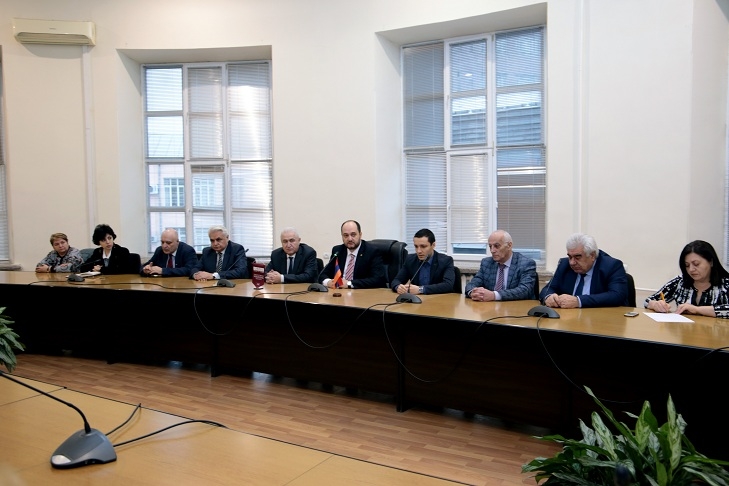 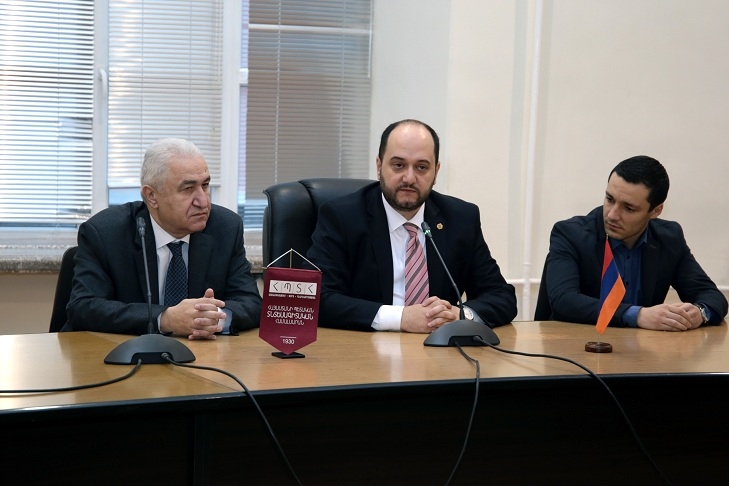 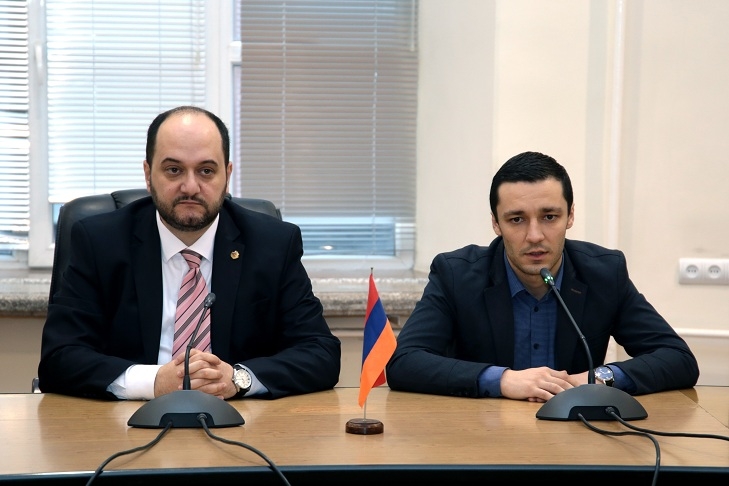 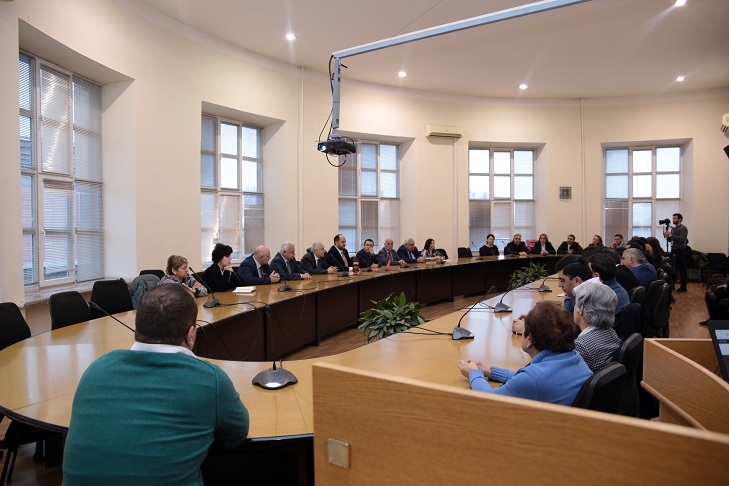 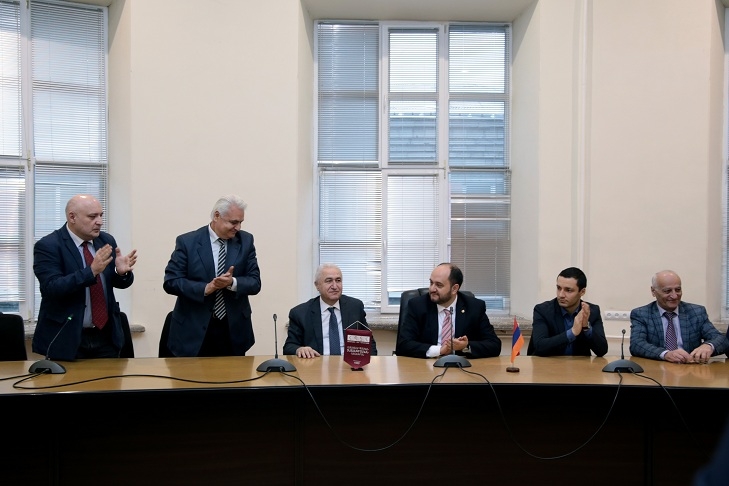 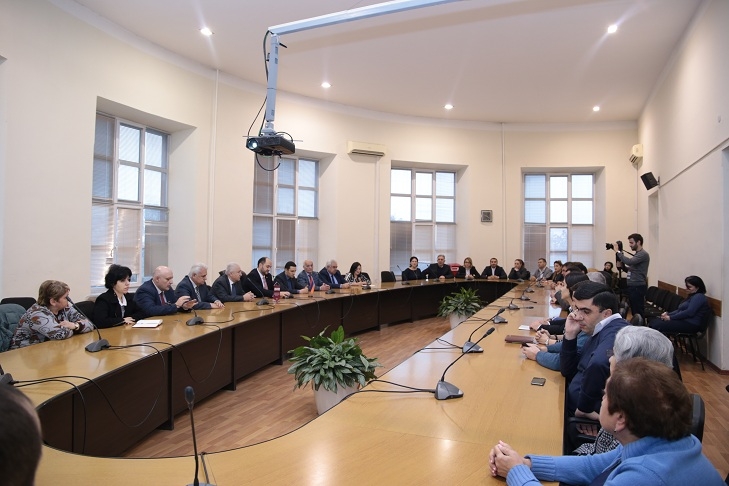 On December 20, Rectorate’s Board session was held at ASUE Conference Hall headed by Arayik Harutyunyan, acting Minister of Education and Science of the Republic of Armenia, attended by representatives of ASUE academic and administrative staff.
Arayik Harutyunyan informed the attendance that ASUE Rector Koryun Atoyan submitted an application for dismissal yesterday. The acting Minister noted that it’s discussed and decision was made to appoint Ruben Hayrapetyan, Doctor of Economics, Professor, as acting Rector of ASUE.
Arayik Harutyunyan thanked Koryun Atoyan noting that the latter's work was not easy, and the press publications are evidence of that the years passed were complex ones of reforms, the work done can be considered successful for the given stage, taking into account the set of the ranks of enlargement of professions, the staff rejuvenation and changes in other directions. Arayik Harutyunyan mentioned that the staff rejuvenation is an important direction for the Ministry.
Referring to the acting Rector, Arayik Harutyunyan mentioned that Ruben Hayrapetyan is one of the youngest Professors in the RA.
“I am impressed by the way he passed and his knowledge, and this can be a good example of a combination of youth, experience and knowledge" Arayik Harutyunyan said, urging the attendance to cooperate with the new leadership of the University. Touching upon the open letter issued yesterday by the staff of ASUE Chair of Management, the acting Minister noted that he is ready to discuss conceptual, fundamental issues, but will not allow one person or a small group of people to break the work of HEIs., stressing only in a cooperative atmosphere it is possible to do maximum to make rapid changes in the university system.
Arayik Harutyunyan also informed that in the nearest future the structure of the Governing Board will be ready, once again emphasizing that the approach of the MES in this issue is the apolitization of the universities boards.
Acting Rector Ruben Hayrapetyan expressed gratitude for the confidence and then thanked Koryun Atoyan for the great work done in recent years, noting that his mission is also the logical continuation of those reforms , expecting the support of the University collective and all partners. Ruben Hayrapetyan noted that in order to resist the existing challenges and carry out the changes, we need each employee's contribution to the common cause and he is ready to work in the atmosphere of discussion and cooperation.
Ruben Hayrapetyan is confident that the further advancement of the economy depends on the development of the Economic Mother University, so the rapid development of the University is mandatory.
"In the context of the changes in the country, we have to be in the right position and be able to bring our benefits”; he said. Mary Badalyan, Dean of the Department of Accounting and Auditing, thanked Koryun Atoyan for joint work, underlining his high quality and also congratulated Ruben Hayrapetyan on assuming the new post. Khoren Mkhitaryan, Head of Science and PHD Division also thanked Koryun Atoyan on the behalf of the University Collective and suggested to set him off with standing ovation.