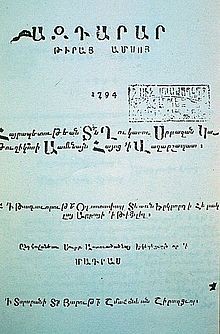 On  October 16, 1794,  “Azdarar”  was  published in Madras,  India,  by  Harutyun Shmavonyan,  who became  a Father  of  Armenian  Press. Being aware of the printing, he was the editor, typesetter, and the printer of  the  magazine, he even prepared   publication paper.

Political, social, moral and cultural issues  were  covered  in “Azdarar”. Being patriotic and ideological figure Shmavonyan  was  sure  that he  was  doing  a  good  job for  educating  and  bringing  up a young generation  with patriotic spirit and  high consciousness.

We  congratulate  all  our  colleagues,  wish  them fruitful  working  process.