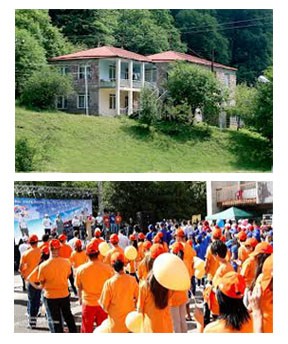 The University students spend their summer vacation in "Tntesaget" sport-health resort during these days. The administration of ASUE has a pleasure surprise for the students this year also: awarding 50 free tickets of the resort's 4th relay. The Head of the sport-health resort Hakob Kyokchyan informs that about 100 students have their rest in Dilijan.

The second course student of Master's program the Head of ASUE brigade Hovhannes Arzumanyan informed that the participants of "Baze-2013", spent on August 12-17 in Tsakhkadzor, arrived in sport-health resort on August 18 and have their rest there. The latter also informed that the "Orange" and "Blue" fronts of "Baze-2013" had won same points and share the victory. ASUE brigade consists of 9 students acted in "Orange" front. Brigade of veterans of Baze members headed by the President of ASUE Student Council Sevak Khachatryan also was among the staff of the mentioned front.

ASUE students took part in sport-cultural different competitions and had success. Hovhannes Arzumanyan highlighted the participation in Brain ring scholars' game, in the result of which they won the first place and bring the first winning points to the "Orange" front. He also added that now they had unforgettable days in Dilijan.