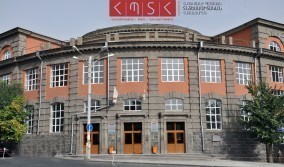 Those students,  who  will  enter  Armenian State  University of  Economics  this  year, and  will  study  well,  but  they  are vulnerable,   will  have  opportunities  given by  the  University. ASUE  Rector,   Doctor  of  Economics, Professor  Koryun Atoyan  announced  about  this  during   ASUE  Scientific  Council’s  session  taken place  today,  presented   new  regulation of student  benefit,  state  and  nominal  scholarship at  ASUE.   Reminding  that  the  tuition  fees  have  risen somewhat, the  Head of  the  University  clarified  that  according to  the  new  regulation  they  aimed  to  direct  the  significant part of these funds  to  solve  the  students’  social  problems, establishing   flexible  system  for  student benefits,  scholarships,  discounts, compensations.  Rector  Koryun Atoyan  stressed    that    these  refer to  the  students  who  study  well,  but  are  vulnerable,  whose  average quality rating must meet the established  threshold.  At  the  same time  the  Head of  the  University  mentioned  that  former  system  of  discounts would  go  on  operating  and  would  be  distributed to all courses’ students.
The regulation  presented  by  the  Rector  was  approved by the members  of  Scientific Council, and  established  by vote,   and  the  President  of  Student  Council Sevak  Khachatryan  highly  evaluated  the  Rector’s  suggestion  and  added  that   it’s  a  wonderful  approach  to  establish  clear  threshold  of  progress.
The  Vice-Rector  of  Science  and  International  Relations  Gagik  Vardanyan  acted  with  report  entitled “The  state of  the  University’s  International  Activity  and  Development  Problems”  particularly  stressing, “International  activity  is  an important   side  of  University’s  activity  which  is  aimed  to  integrate to  international  education  and scientific space,  to increase  competitiveness  in  the  market of  educational  and  scientific  services, to  strengthen  the  University’s  positions and  to increase  the  status  of  international level  of research and education center”.  The  Vice-Rector  Gagik  Vardanyan  presented  the  state  of  the  University’s international  activity,   problems  and  plans.  He  referred  to  the  activity  of  the  University’s  official  website  among  the  indexes  characterizing the University’s  international  activity  and  stressed that  the  website  was  among  the   first  trio  of  the  Armenian  Universities.  Speaking  about  internationalization of the  University research  direction Gagik  Vardanyan  expressed  hope  that  newly  created ASUE  research  center  “Amberd”  would  be  a  good  stimulus.
The  Director  of  ASUE  Gyumri  branch  Samson Davoyan  presented  the  organization  plan  of  educational  and  scientific  research  works  of  the  2012-2013  academic  year. Scientific  Council  approved   the  report.  Topics  of  thesis   and  a  number  of  issues  regarding  establishment of  scientific directors were  presented,  two  collections,  one educational  manual  were  guaranteed for  publication.  The  members  of  Scientific  Council  decided  by  vote  to  apply Higher Certification Commission  for    awarding  scientific   degree  of  Associate  Professor  to  Gagik  Aghajanyan.
ASUE  Media and Public  Relations  Division