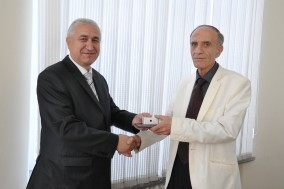 Koryun Atoyan, ASUE Rector, handed the  award, announced during Rectorate Board's session on June 20,  to Levon Khcheyan, an Associate  Professor in  the Chair of Theory of Economics, Candidate  of Economics.
P.S. During  the  Scientific Council’s session Koryun Atoyan  announced that  Levon Khcheyan was awarded with ASUE gold medal for economic development and the significant contribution  in preparing future economists.   Levon Khcheyan wasn't present at the ceremony that’s  why  the award  was  handed  today.

“Mr. Khcheyan has  been  working here  from the  first  day  of  the  University’s  foundation and  has a significant investment   in preparing future economists”,  mentioned Koryun Atoyan and handed the  gold medal, thanked  Levon Khcheyan for the contribution in development of the University, as well as  congratulated  for  being awarded.

Levon Khcheyan mentioned  that he  had  won many awards during  his  lifetime and did not exclude that  he would win new  ones. “But this award is the  most  expensive  for  me, as I  have  spent  whole  my  life  in this  University”, said Levon Khcheyan, thanking Koryun Atoyan.