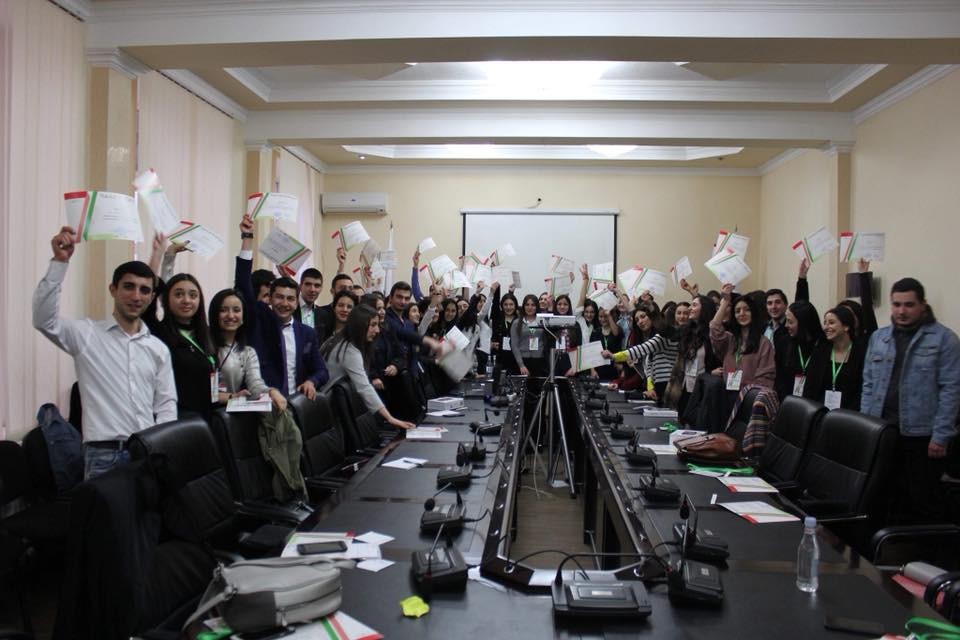 ASUE Student Council jointly with the Youth Foundation of Armenia conducted "Elevator" interuniversity student workshop under the slogan "Let's get higher" on March 10-11. 100 selected students from 8 Armenian universities took part in the workshop. They had an opportunity to discover the labor market requirements and complete practical knowledge with the help of specialists in various fields. The aim of the workshop was to inspire students to new achievements.

The "Elevator" was launched by the President of the SC, Hovhannes Harutyunyan, with welcoming and wishing success to the participants. Topical topics were discussed, game-competitions were organized.

The first talk "The Future in the hands of youth" was held by Arusyak Poghosyan, Head of YFA Program Implementation Service. She emphasized the role of young people in the development of the society, urging to be purposeful and hardworking. The psychologist David Hayrapetyan, director of the Center for the Implementation of the Youth Events, made a speech on the theme "Ten for One." He touched upon the theory of communication, the fraiman effect and representational skills. Psychologist, trainer Hrachya Amiryan continued with the speech on "How to Build My Own Self" theme. He directed students to self-awareness, encouraged them to manage the weaknesses and strengths of their character.

The first day of the workshop was summed up with a team game, with the help of popular Johari window simulation game, they discovered their character traits and then nominated their candidate as executive director of Elevator Closed Joint Stock Company. The start of the second workshop day was given by Arevik Hambardzumyan,  General Director of The LOFT entertainment center, talking about the effective management of  the time.

The workshop was marked in a new format.  the workshop participants had the so-called "Elevator speeches". The participants who had made their speeches were awarded points that were collected during the whole period of the workshop, and overall 3 winners were selected and received special prizes.

Psychologist Seda Vardanyan and Suren Aloyan, the founder-director of Dasaran.am educational program, concluded the series of talks. Seda Vardanyan helped the participants understand how to succeed in interpersonal relationships, and Suren Aloyan's keynote address was not only gain knowledge, but also realize it in favor of something.

The workshop was summed up with the results of "Team video clips" and "Unique and creative photos" competitions.

ASUE Financial Department's student Zhora Stepanyan won the nomination for "Best Photo" and the team that presented the best video clip received 5 points for the points earned during the workshop. As a result, Anahit Mkhitaryan, Lusine Arakelyan and Tamar Ghazaryan scored maximum points. They received tablets as a prize.

Certificates were issued to all participants.