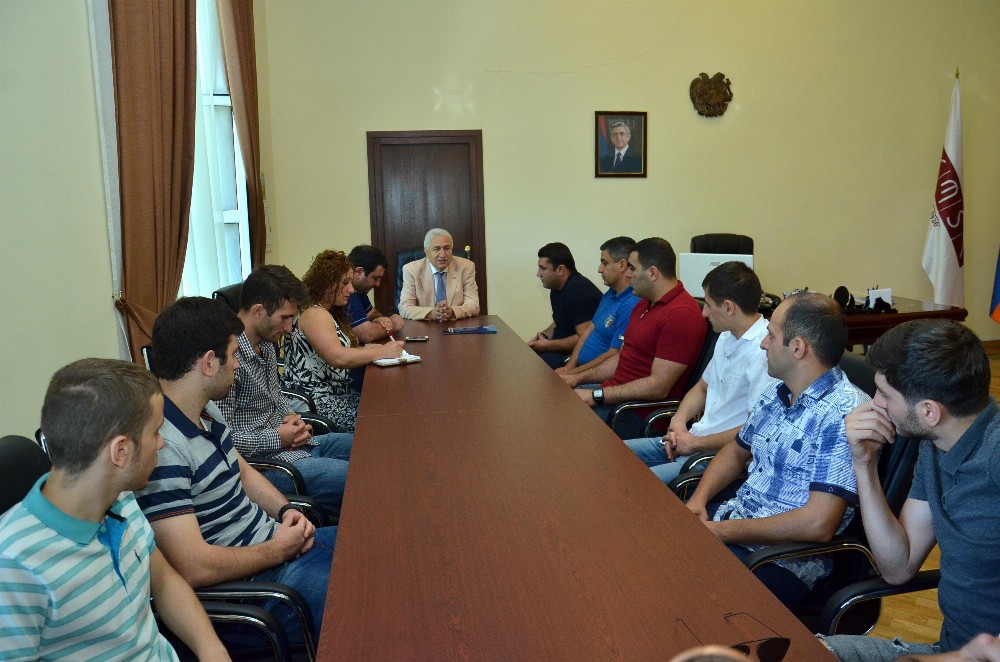 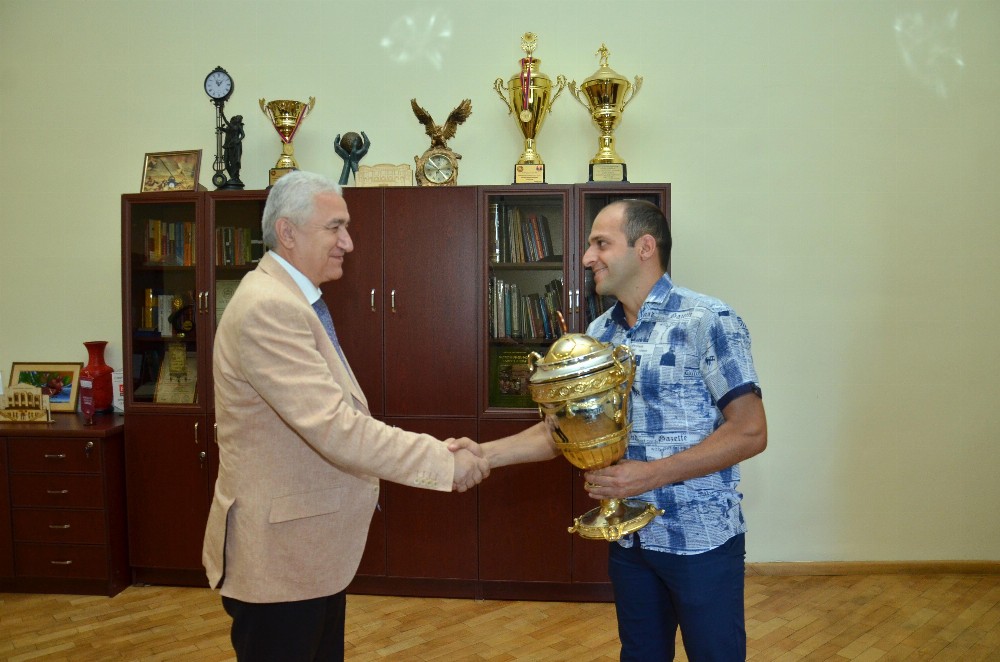 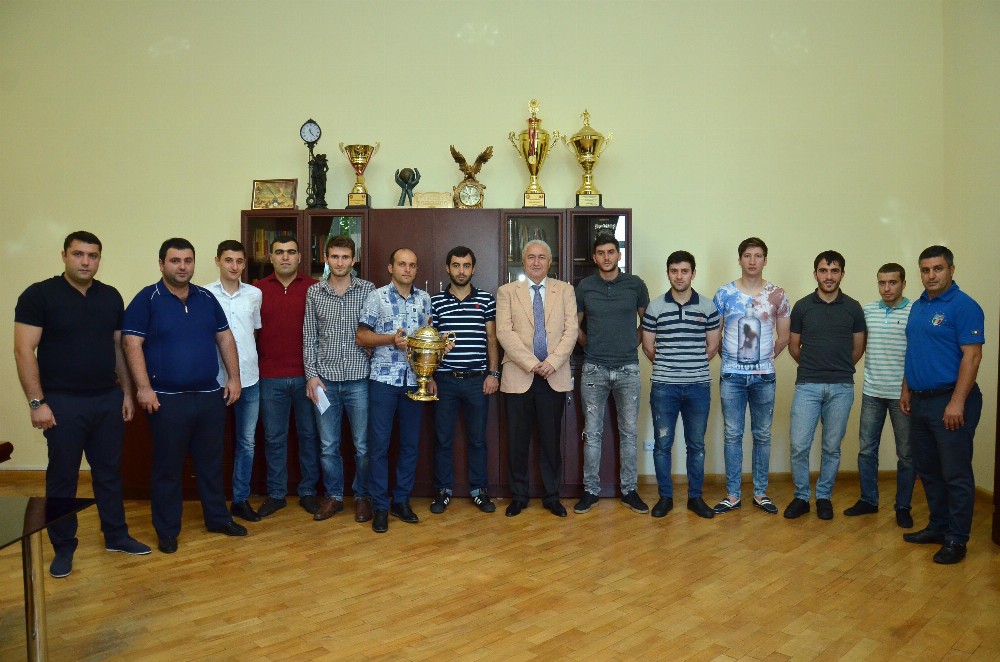 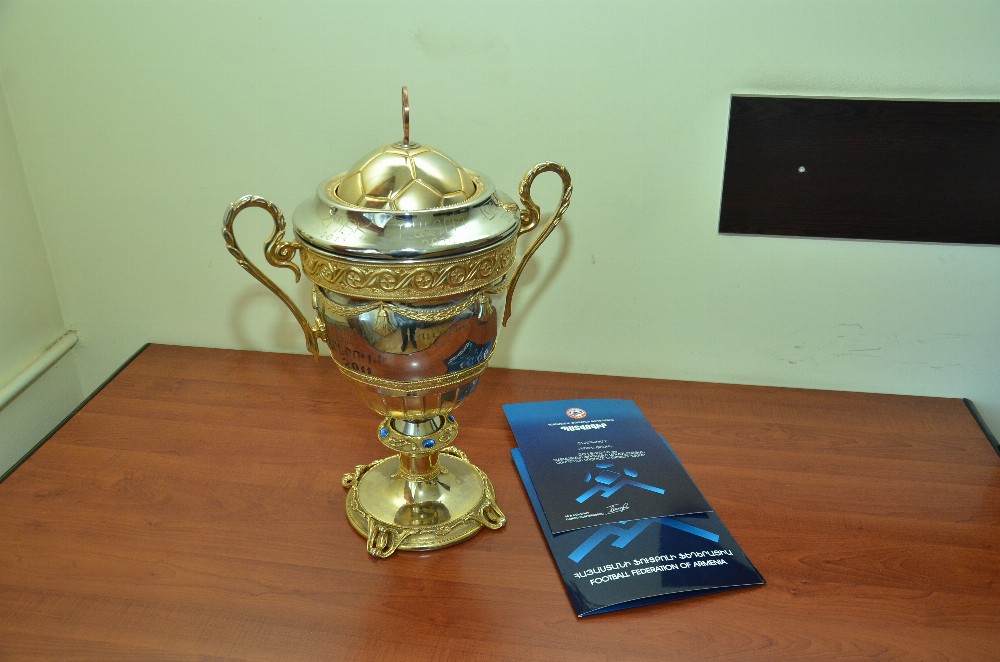 Today,  as a  tradition, the  futsal  team of  Armenian State  University  of  Economics  awarded  the  champion cup and  a  certificate to  ASUE  Rector, Professor  Koryun Atoyan.

Rector  Koryun Atoyan  hosted  the  team members  in his  office, congratulated  and  expressed  gratitude  on behalf  of the  University staff  and students  for  achieving continuous success and upholding the University reputation.

“Your  success encourages us  and  I  want  to  stress  that due  to  it the 2016/17 UEFA Futsal Cup preliminary round   will  be  held  in Armenia  for  the  first  time. It will enable  the  name  of  our Country,  our University  to  sound  in international arena  for few  days”; mentioned the  Rector. The  Head  of  the  University congratulated  and  expressed  gratitude to  team members,  chief  coach  Karen Mikayelyan,  Hovhannes  Gabrielyan, Head of  the  Chair  of Physical Training, Emergency Situations and Civil Defense,  Sevak  Khachatryan, Vice Rector  on Students  and  Alumni Affairs.

The  Vice  Rector  thanked  Rector  Koryun Atoyan  on behalf of  the team,  mentioning  that the  team  won’t be  able  to  achieve  success  without the  Rector’s  support. The  Vice  Rector reminded  that  the  team  will  leave  for  Zagreb  tomorrow to  participate  in  futsal  championship  held  within the  framework  of  European  student games.

Hovhaness  Gabrielyan also expressed  gratitude  for  the  support,  stressed  that the  team  has  become  a big  and  kind  family  during  these  three  years,  and  this  victory  shows that the team is the favorite.  The  Head of  the  Chair  also  mentioned that the team has well  prepared for  the  upcoming  matches: has trained in the best halls,  medical personnel has been involved.

The coach  Karen Mikayelyan promised that the team will  do  its  best  to  achieve  success in upcoming  matches.