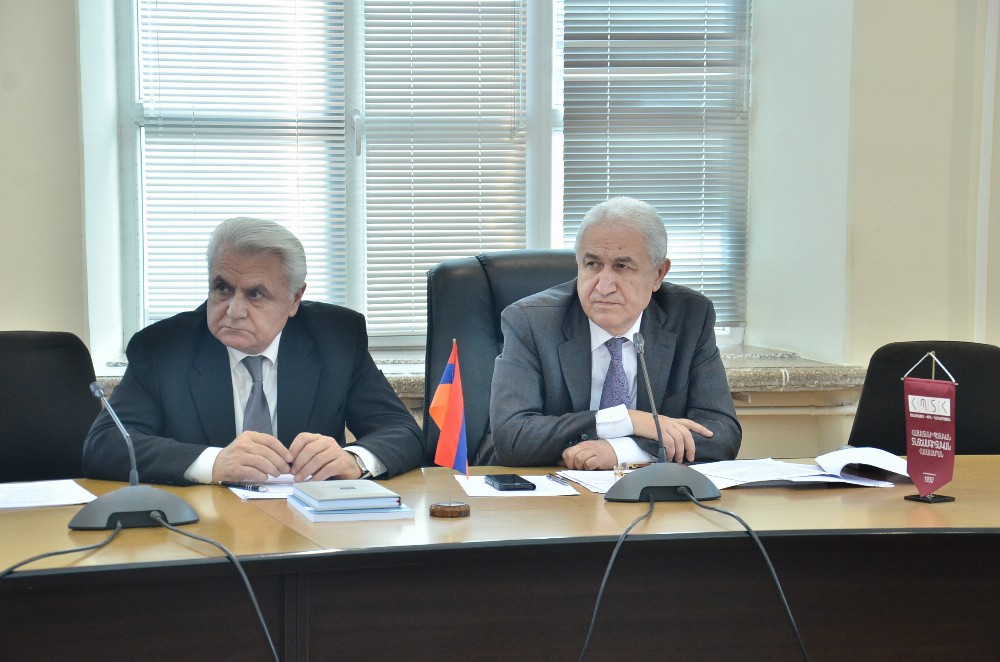 Today's ASUE Scientific Board's session, headed by ASUE Rector, Professor, Chairman of Scientific Board Koryun Atoyan, was full of agenda. The first issue of the session was the Development of Educational Programs, which was delivered by Paruyr Kalantaryan, Vice-Rector on Educational-Methodological Matters, who presented the process of project development and the work done. Vice-rector also presented a number of documents for the approval of the Scientific Board. Thus, the Scientific Board approved the following 9 documents: regulations of admission to ASUE Full-time Master's Program for the 2018-2019 academic year, methodological instructions for completion and protection of graduation work, methodological instructions for the Master's thesis, formation and work procedure of ASUE certification commission, procedure for discussing and appraising the ASUE final attestation assessment, ASUE graduation work and Master's thesis review,  requirements for developing Master's program in ASUE, methodology for completing formats of Master's curriculum and training program, procedure for conducting student surveys for course evaluation.

Mihrdat Harutyunyan, Vice-Rector on Educational-Organizational Matters, reported on the results of the first semester session of the 2017-2018 academic year. Stressing that the teaching and learning process at the university was organized in accordance with the current regulations and decisions of the Scientific Board, the vice-rector detailed the overall picture. Mihrdat Harutyunyan also presented the problems. The Scientific Board evaluated the done work satisfactory and decided to set up assignments for the organizers of the process.

Sevak Khachatryan, Vice-Rector on Students and Alumni Affairs reported on organization of the educational-production, scientific-pedagogical and research experiences, the problems of dean's offices and chairs. Koryun Atoyan instructed to convene a separate discussion aimed at improving the experience. The Scientific Board appreciated the work done and addressed the responsibles for improving the organization of experiences.

Vice-Rector of Science and International Relations Gagik Vardanyan reported on some issues connected with the dissertation topics and scientific leaders, which were confirmed. Scientific Board approved the publication of a number of teaching aids and monograph.