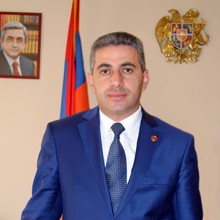 The  Governor  of  the  RA Vayots  Dzor  Region, the  former  Dean  of ASUE  Department  of  Management,  Edgar  Ghazaryan’s  congratulated  the  5th  anniversary  of  ASUE  Yeghegnadzor  Branch.  We  present  the  congratulating  speech  below:

I  congratulate my   colleagues and students of  Armenian State  University of  Economics  Yeghegnadzor  Branch  on  the  5th  anniversary  of  foundation.

The  Branch  has  undergone  complex and difficult  process    and   has confirmed  its stable  role  both  in high education  system    of the Region and  the   RA.  The passed 5 years proved the real necessity and role of the Branch.  It’s  already  5 years  that   more  than hundred of young  people  have  an  opportunity  to  get  good  high education.   The  first  graduates  of  the Branch  managed  to  find  work  according to  their  specialty:  at  same  time have   an  opportunity to  have  Master’s  education.

I  wish  the  Branch to  have  new  achievements  in  future,  which   are consistent with the priorities  adopted  by the  RA   Government of   balanced development  of  regions, as well as  solution of  social  problems  through education.

The  Governor  of  the  RA  Vayots  Dzor